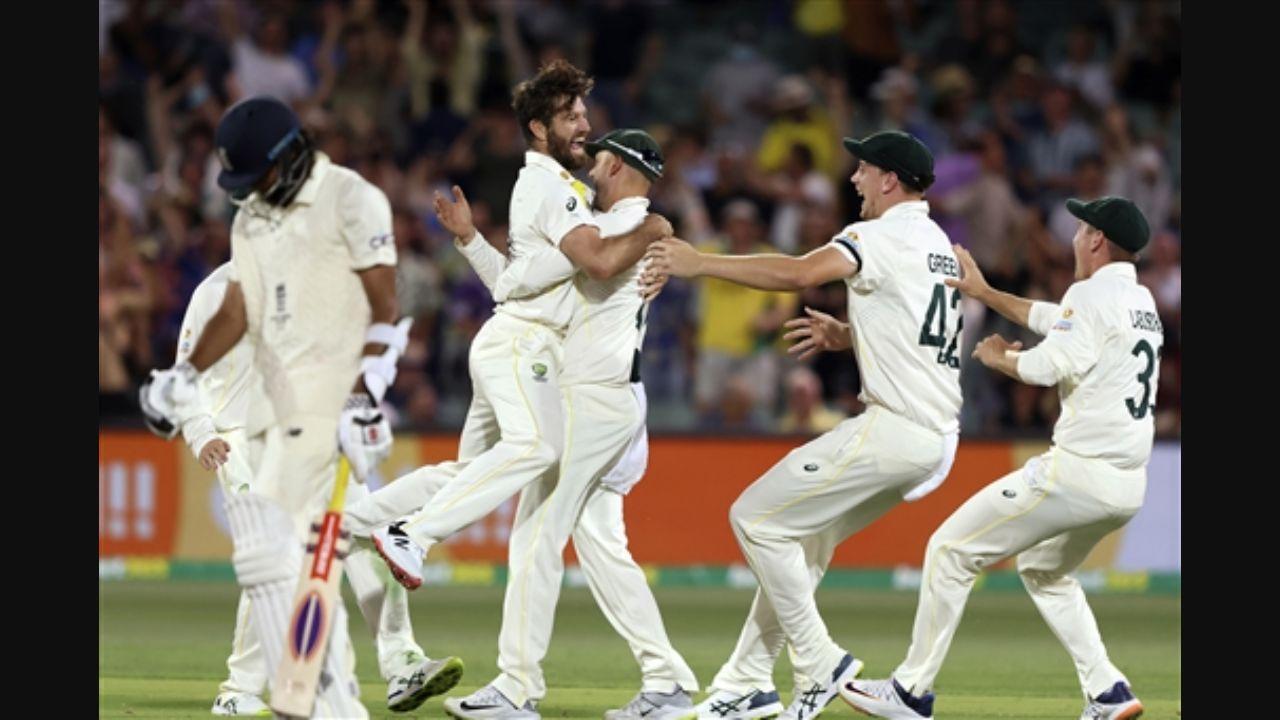 Australia removed England openers Rory Burns and Haseeb Hameed to leave the tourists at 17/2 in 8.4 overs, trailing by 456 runs at stumps on day two of the second Ashes Test at the Adelaide Oval.

After Australia, on the back of counter-attack from the lower-order, declared at 473/9 in the first innings, Mitchell Starc and Michael Neser took out Burns and Hameed before a large lightning strike outside the venue forced early stumps to be called on a day thoroughly dominated by Australia.

In the final session, debutant Neser and Starc inflicted more misery on England with stunning late cameos. Neser and Starc shared a rollicking 58-run stand off just 51 balls as the hosts` lower-order, along with Jhye Richardson, added 89 runs in only 10 overs before captain Steve Smith declared the innings. With the ball, Starc struck on the first ball of his second over as Burns edged a nipping away delivery straight to Steve Smith at second slip. Neser got his first Test wicket on just his second ball as Haseeb Hammed chipped to mid-on.

A massive flash of lightning outside the venue when Neser bowled the fourth ball to Dawid Malan prompted the umpires to take the players off the field, eventually causing stumps.

Earlier, Marnus Labuschagne competed his sixth Test century while Steve Smith fell short of his and Carey chipped in with a half-century as Australia piled on the runs on an improved yet hapless England bowling attack.

Resuming from 221/2, Smith got the first boundary with a fierce cut through point off James Anderson. Labuschagne, who ended day one unbeaten on 95, reached his maiden century in the Ashes with a streaky edge past the slip cordon off Anderson for his eighth boundary in a gritty knock. Labuschagne reached the three-figure mark in 287 balls, making this his slowest century in Test cricket.

The right-handed batter, who earned two reprieves on 21 and 95, was caught behind by keeper Jos Buttler on 102 off Ollie Robinson`s first delivery of the day. But replays showed that Robinson`s foot was on the line with nothing behind, giving Labuschagne another life. Eventually, Robinson had the last laugh in his next over, with a nip-backer that Labuschagne shouldered arms to and hitting him on the knee roll of back pad. The 27-year-old reviewed but couldn`t change the decision.

Smith, in company of Travis Head, continued to move forward to reach his 32nd half-century, with a top-edge flying past Buttler while pulling a short ball from Ben Stokes. Head lofted over Joe Root`s head but the England captain got his wicket on the next ball, foxing the left-hander into yorking himself.

Cameron Green didn`t last long as Stokes got one to move past the outer edge and hit the top of off-stump.

Smith and Carey ensured that Australia didn`t lose another wicket till dinner break arrived. After the break, Carey, the hometown boy, was watchful at start but looked for scoring opportunities whenever it came while Smith was on cruise mode.

While Carey feasted on Root`s part-time off-spin, Smith was quick in dispatching all bad balls to the boundary. The 91-run stand between Smith and Carey was broken by James Anderson, whose low nip-backer rapped Smith plumb in front of the pads. Smith`s dismissal on 93 meant that he missed out on his 28th Test century,16th as skipper and 12th in the Ashes.

Also Read: Michael Atherton: Smith seems to exist in his own world

In his next over, Anderson returned to fox Carey, who recorded his maiden Test half-century, with an off-cutter, which the left-hander spooned to Haseeb Hameed at short cover on the stroke of tea. But with Starc and Neser shining with bat and ball in the final session, Australia found themselves back on the driver`s seat at the end of day two.