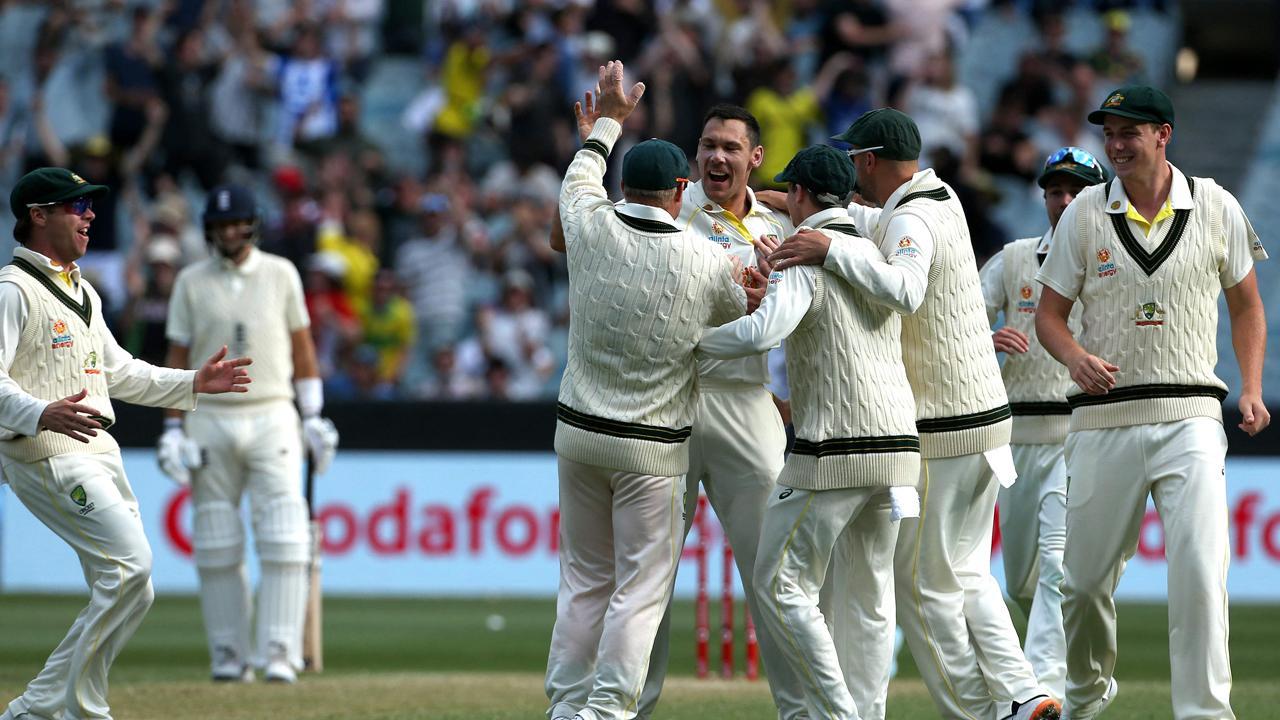 On an extraordinary of cricket both on and off the field, England faced an uphill battle to save the third test against Australia and with it the Ashes.

Before play even began Monday. Cricket Australia called for calm after a COVID-19 scare involving two members of England`s support staff resulted in a delay to the start of the second day of play at the Melbourne Cricket Ground.

Australia was bowled out for 267 as the home side grabbed a first-innings advantage of 82 runs, before England reached 31-4 in its second innings at stumps Monday.

England seamer James Anderson gave a masterful display, claiming the key wickets of Marcus Harris (76) and Steve Smith (16) in his tally of 4-33 off 23 overs.

But England`s batters were soon under attack again. Mitchell Starc (2-11) dismissed Zak Crawley, caught behind for 5, and Dawid Malan, leg before without scoring, in consecutive deliveries in the fifth over.

Debutant Scott Boland (2-1) delighted his home crowd of 42,626 roaring fans by removing opener Haseeb Hameed for 7 and Jack Leach without scoring in the penultimate over of the day.

With Ben Stokes and Joe Root at the crease, England had lost four wickets after just 12 overs and still requiring another 51 runs to make Australia bat again.

Earlier, Cricket Australia`s chief executive Nick Hockley says there is no need to change current plans, which include staging the fourth and fifth tests in Sydney and Hobart, respectively.

“We just need to remain calm and get the facts,” Hockley said.

“Every one needs to follow the medical advice. On that basis, we keep going.”

“Our protocols are designed for absolutely this set of events.”

In a day of early drama, Cricket Australia released a statement confirming the COVID-19 outbreak within the England camp, which delayed the team`s arrival at the MCG and caused a 30-minute delay to the start of play.

“Cricket Australia has been informed that two members of the England cricket team`s support staff and two of their family members have returned a positive COVID-19 Rapid Antigen Test,” the statement said.

“The affected individuals are currently isolating. The entire playing group and all other support staff have undertaken Rapid Antigen Tests this morning and all have tested negative.”

“The England cricket team will also have PCR tests today, and both teams will take extra precautions throughout play.”

The Australian Seven Network`s television coverage of the match was also affected. A member of the broadcast staff tested positive to the virus, forcing commentators to isolate as the network called in a fresh team.

Australia captain Pat Cummins was unable to play in the second test after becoming a close contact of a COVID-19 case.

Since the start of the pandemic in 2020, England`s tours of South Africa and Sri Lanka were abandoned mid-tour due to COVID concerns.

Australia leads the five-match series 2-0, which means England needs to win all three remaining matches to regain the Ashes.