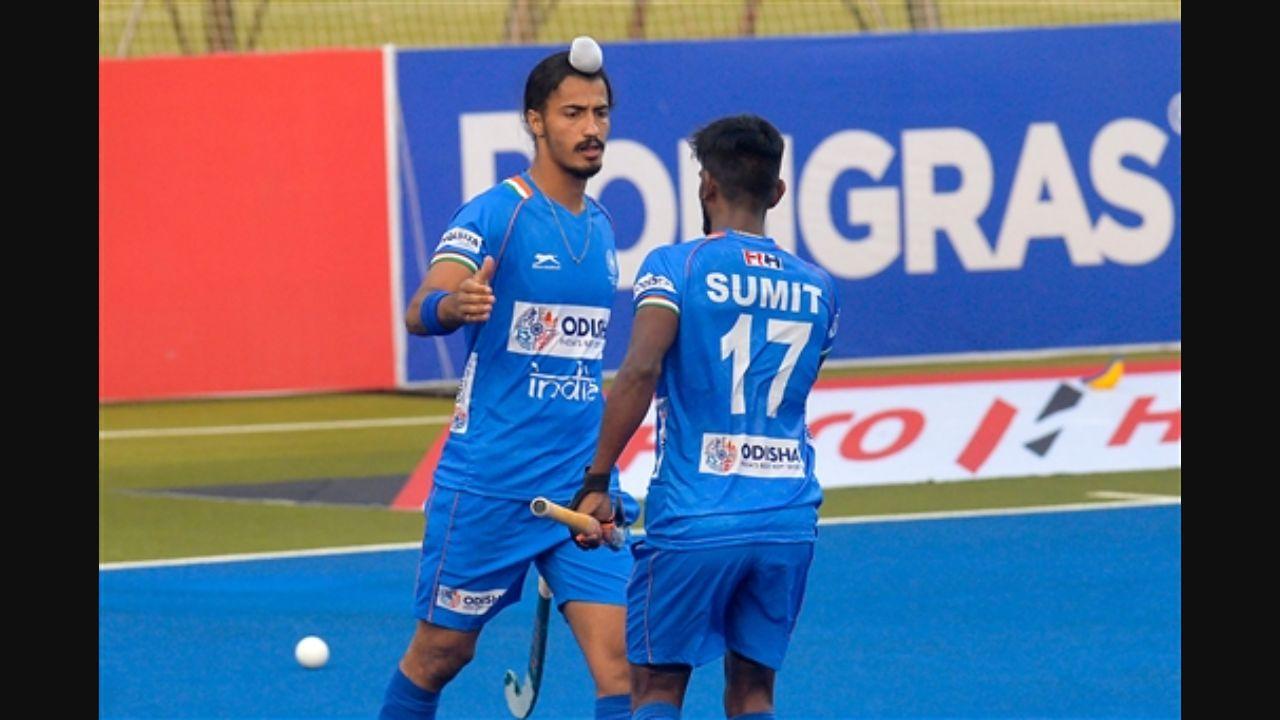 Indian eased past hosts Bangladesh with a convincing 9-0 victory in the Men`s Asian Champions Trophy at the Maulana Bhasani Hockey Stadium.

It was Dilpreet Singh who starred in India`s win with a fine hat-trick that gave India a breakthrough in the first quarter. He scored goals in the 12th, 22nd and 44th minute to put pressure on the Bangladeshi defence while Jarmanpreet Singh (31`, 43`), Lalit Upadhyay (29`), Akashdeep Singh (54`), Mandeep Mor (55`) and Harmanpreet Singh (57`) too scored in India`s first win at the prestigious continental tournament.

The match started with a resilient Bangladeshi defence disrupting their high-octane attacks of Indian forwards. As many as eight PCs earned by India in the first quarter were brilliantly defended by the hosts, particularly their first rushers doing a fine job to keep

India from taking an early lead. Dilpreet Singh, managed to break the gridlock in the 12th minute, with a good assist by Skipper Manpreet Singh was put away by the young forward to give India 1-0 lead. Dilpreet doubled India`s lead in the 22nd minute and Lalit scored from a fine deflection via Harmanpreet`s drag flick to take India`s tally to 3-0 at half-time.

During the ten-minute break, India`s Chief Coach Graham Reid insisted that the team will start the third quarter afresh with a clean slate and work on improvised variations to score. The players acted upon his advice as they showcased a much better attack and the variations in PC proved hard for the hosts to defend.

India added two more goals in the third quarter through a well executed PC attack led by Harmanpreet Singh and Jarmanpreet, he was on target scoring back-to-back goals. The duo helped in taking India`s lead to a formidable 5-0 while Dilpreet scored his hat-trick in the 44th minute extending India`s lead to 6-0. The final quarter saw an array of goals scored by India which helped them seal the victory with nine goals. India dominated the match with 16 shots on goal and 25 circle
entries.

Speaking about their performance today, Skipper Manpreet Singh said, “It was a good effort from the team and we tried different variations in this match which we had been working on during our training. I feel at the start, we couldn`t convert as Bangladesh had put up a very strong PC defence. But at half-time, Coach Graham provided important inputs on how we could improvise ou attack and as you all could see we improvised as the match progressed.”

“We will go back and further analyse today`s and yesterday`s game (against Korea) and find ways to come up with a much better performance against Pakistan,” he added. On Friday, India will take on Pakistan in the ongoing tournament.