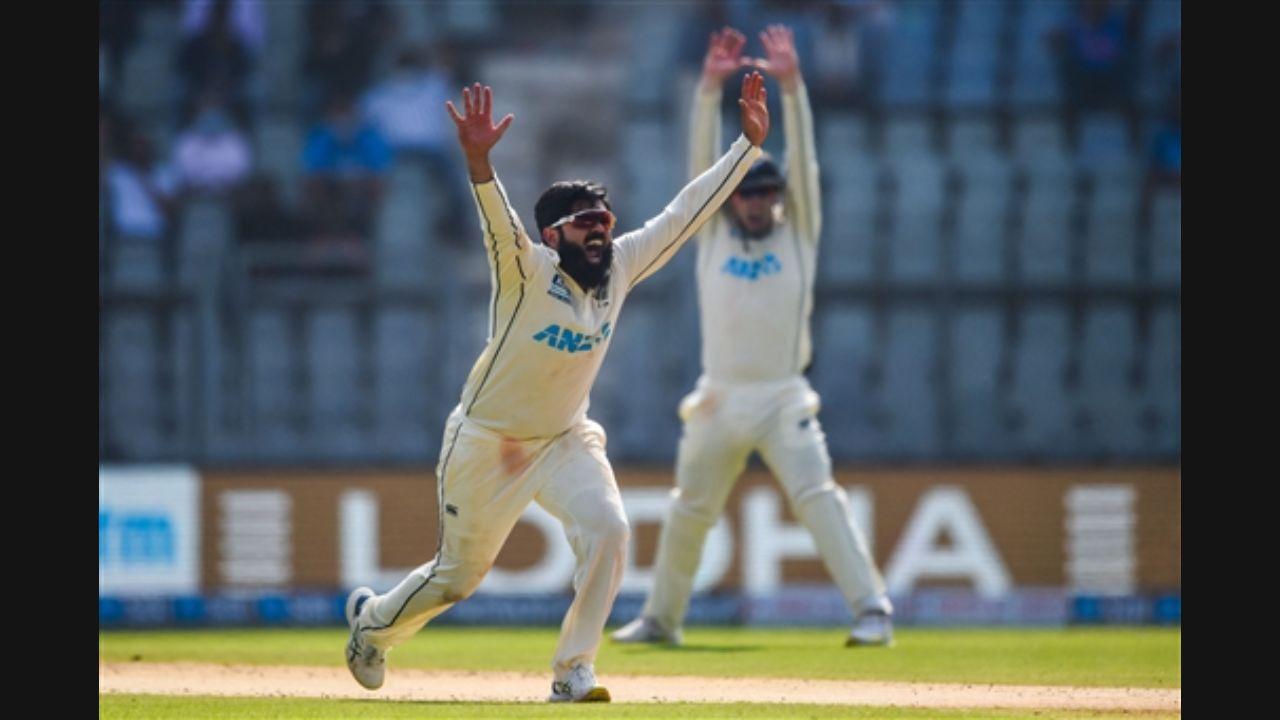 Cheteshwar Pujara`s poor show continued while skipper Virat Kohli got a debatable leg before decision as India went into tea at 111 for three against New Zealand on the curtailed opening day of the second Test.

Shubman Gill (44 off 71 balls) looked fluent before paying for his impetuosity which led to a mini collapse as Mumbai-born left-arm spinner Ajaz Patel (15-7-30-3) picked up Pujara and Kohli in quick succession with both failing to trouble the scorers. Mayank Agarwal (52 batting), after a jittery start looked good in the company of Shreyas Iyer (7 batting), who again had to come out after a top-order collapse.

Credit should go to Patel, the second Mumbai-born cricketer after legendary England captain Douglas Jardine to play against India in his city of birth. Patel altered the length cleverly and the extra bounce which is always a speciality of Wankhede helped him immensely.

He had Gill on the mat when he flighted one to entice him to come out and the ball tuned and jumped with keeper Tom Blundell making a hash of a stumping.
However, the very next ball saw him shorten the length as Gill tried jabbing at it and it turned enough to take the outside edge into Ross Taylor`s palms. Pujara`s confidence is in complete shambles after too many failures and he survived a DRS appeal from New Zealand before he jumped down the track to york himself. Patel, very wisely, fired one with an angle straight into his toes and what happened with Pujara often happens with out-of-form batters.

For skipper Kohli, it was a delivery that straightened after pitching as the Indian skipper tried to play a forward defensive stroke. Straight umpire Anil Chaudhary gave him out and Kohli immediately asked for a review. The replay was inconclusive whether it hit the bat first or pad and as per rule, the TV umpire Virender Sharma had to go with his on-field colleague, leaving Kohli absolutely livid. He had a word with leg umpire Nitin Menon and was seen expressing his displeasure.

The TV cameras then caught him standing in the dressing room balcony, visibly upset with the decision, which was a touch and go one. Earlier, when the match started the two Indian openers looked in fluent touch on a pitch where one got value for their shots.

Gill, in fact, started with three boundaries off Kyle Jamieson — an on-drive, a cover drive and a flick off his legs. Agarwal, for good measure, hit Patel down the ground for a six while Gill carted Will Sommerville (0/29 in 6 overs) over deep mid-wicket for another maximum. Once Gill was out, Patel brought New Zealand back in the game even as Agarwal completed a much-needed half-century.