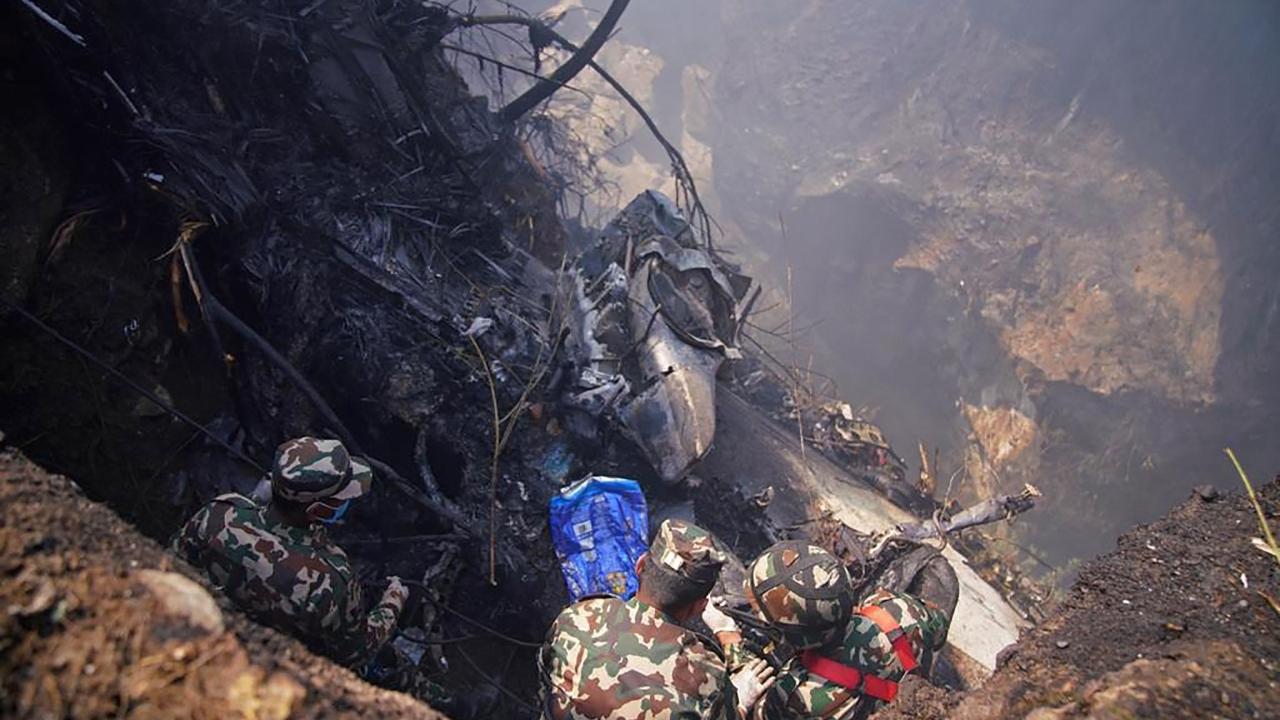 At least 68 people were killed when a Nepalese passenger plane with 72 people onboard, including five Indians, crashed into a river gorge while landing at the newly-opened airport in central Nepal`s resort city of Pokhara on Sunday, a rescue official said.

Yeti Airlines` 9N-ANC ATR-72 aircraft took off from Kathmandu`s Tribhuvan International Airport at 10:33 am and crashed on the bank of the Seti River between the old airport and the new airport, according to the Civil Aviation Authority of Nepal (CAAN).

A total of 68 passengers and four crew members were on board the aircraft.

“So far, dead bodies of 68 people have been recovered from the crash site, an official at the Search and Rescue Coordination Committee of the CAAN told PTI over the phone.

However, the dead bodies are yet to be identified, he added. Efforts are on to recover four more bodies, he said.

Foreign nationals onboard the plane included five Indians, four Russians, two Koreans, an Australian, a French, an Argentine and an Israeli.

There is no information about any survivor so far, said Sudarshan Bartaula, spokesperson at Yeti Airlines.

The weather in Pokhara was absolutely fine and the engine of the aircraft was also in good condition, he said.

We don`t know what has happened to the airplane, he said.

The search for the remaining four people onboard is underway.

However, some local media reported that the aircraft took a wider turn while attempting to land, which may have caused the accident. It was a new airport built

under a Chinese soft loan and inaugurated just two weeks ago.

“An ATR-72 plane of Yeti Airlines crashed today near the Pokhara Airport while flying from Kathmandu. According to the info provided by Civil Aviation Authority of Nepal, 5 Indians were travelling on this flight. Rescue operations are underway,” the Indian mission tweeted.

The embassy is in touch with local authorities and is monitoring the situation, it said.

“Deeply grieved on hearing about the air crash in Pokhara, Nepal. Our thoughts are with the affected families,” India`s External Affairs Minister S Jaishankar tweeted and shared the helpline numbers of the Indian Embassy.

According to Tek Bahadur KC, Chief District Officer of the Kaski district, the plane crashed into the Seti river gorge. Rescue operations are currently being conducted, he was quoted as saying by The Himalayan Times newspaper.

Among the passengers were three infants, three children.

The emergency meeting of the Council of Ministers held on Sunday afternoon has decided to announce a public holiday on January 16 to mourn the victims of the Yeti Airlines plane crash.

He expressed sadness over the crash and directed the Home Ministry, security personnel and all the government agencies to carry out immediate rescue and relief operations.

The government formed a five-member probe committee under Nagendra Ghimire, former secretary at the Ministry of Culture, Tourism and Civil Aviation, to investigate the accident.

The government has also directed that every domestic airline`s aircraft undergo rigorous inspections before taking a flight.

Following the Yeti Airlines aircraft crash, the Pokhara International Airport has been closed for today for all incoming and outgoing flights.

Shortly after the crash, police reached and started a rescue operation.

Gyan Bahadur Khadka, police spokesman, Kaski, said that there was a problem in the rescue due to the difficult terrain.

After the aircraft crashed in the center of Pokhara, a crowd gathered around the accident site.

Spokesman Khadka said that this has hampered the rescue process. He said, “There is a crowd of thousands. Due to the crowd, there has been a problem in the rescue as even the ambulance and fire brigade has been hindered.

Nepal has had a fraught record of aviation accidents, partly due to its sudden weather changes and airstrips located in hard-to-access rocky terrains.

The last major air accident in Nepal happened on May 29 when all 22 people onboard, including four members of an Indian family, were killed as a Tara Air plane crashed in Nepal`s mountainous Mustang district.

In 2016, all 23 people aboard were killed when a plane of the same airline flying the same route crashed after takeoff.

In March 2018, a US-Bangla Air crash occurred at the Tribhuvan International Airport, killing 51 people on board.

A Sita Air flight crashed in September 2012 while making an emergency landing at the Tribhuvan International Airport, killing 19 people.

A plane flying from Pokhara to Jomsom crashed near Jomsom airport on May 14, 2012, killing 15 people.