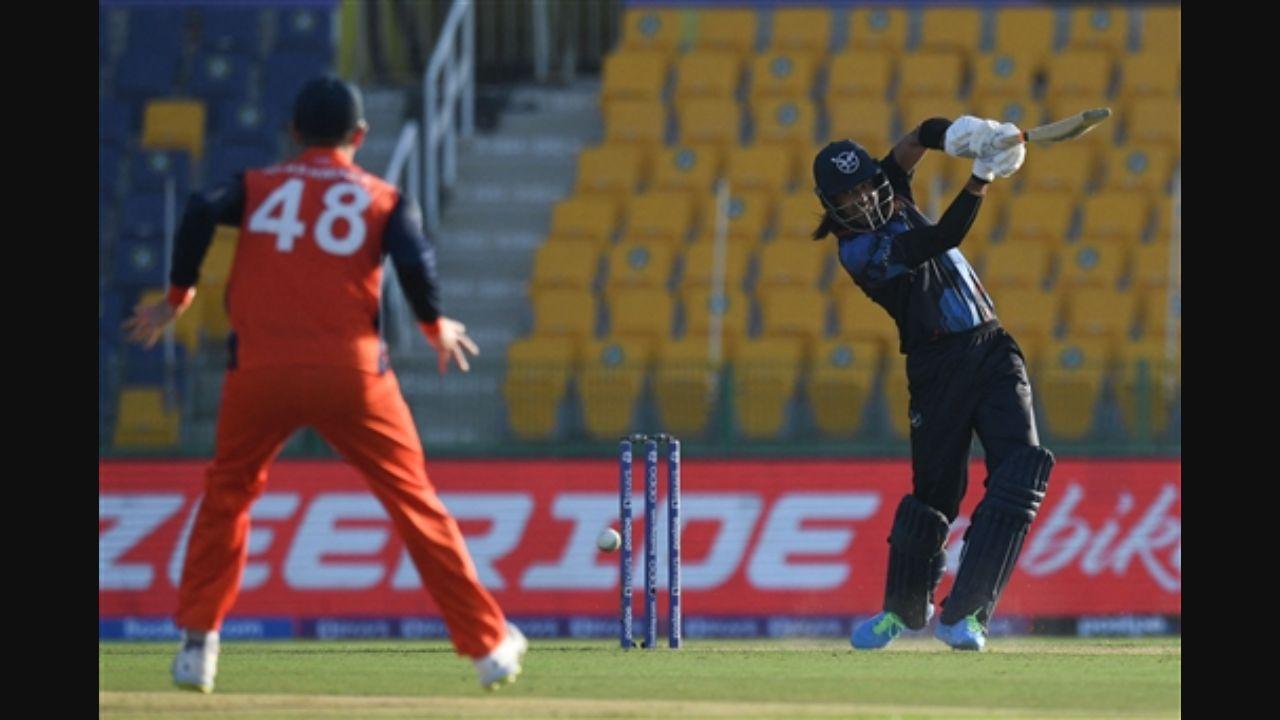 All-rounder David Wiese`s unbeaten fifty (66 not out off 40 balls) led Namibia to a comprehensive six-wicket win over Netherlands in the 7th match of the ICC Men`s T20 World Cup 2021 at Sheikh Zayed Stadium.

This was the first win of the tournament for Namibia while Netherlands` campaign is in tatters after two losses in as many games. The victory keeps Namibia`s hopes of reaching the Super 12 alive, while the Netherlands now need to beat Sri Lanka in their final match to have any chance of making it through.

Opener Max O`Dowd`s second half-century of the tournament helped the Netherlands post 164/4 in 20 overs. Chasing a challenging target for victory, Namibia had a good start, scoring 41-1 in the powerplay. However, the likes of Craig Williams and Baard then fell in back-to-back overs, leaving Namibia in trouble. The loss of three wickets in the first 10 overs with 68 on the board left the middle order with plenty to do. But with Wiese and Erasmus in the middle, Namibia were still in the hunt.

Both Wiese and Gerhard Erasmus refused to go on the defensive. Roelof Van der Merwe was taken for two sixes – of which Wiese went straight down the ground – in an over that cost 16 runs. Colin Ackermann conceded 19 as Wiese again went over the bowler. Wiese`s fifty came off just 29 balls – fittingly with his fourth six of the day, this one over cover. Erasmus` 32 off 22 balls was vital in the match-winning partnership of 93, off just 51 balls.

The Netherlands had little answer to Wiese`s ball striking. While they managed to send back Erasmus and Fred Klaassen bowled a tight spell at the death, JJ Smit (14 not out off 8) completed the formalities for a famous win.

Earlier, batting first, Netherlands openers Stephan Myburgh and Max O`Dowd adopted a positive approach and played freely in the powerplay. Myburgh and O`Dowd welcomed David Wiese with a couple of fours in the second over. O`Dowd, carrying his good form from the first game, pulled a short ball from Ruben Trumpelmann for six and then charged down the pitch for a lofted four down the ground.

The opening pair added 42 runs before Jan Frylinck gave Namibia the first breakthrough by getting rid of Stephan Myburgh (17) in the final over of the powerplay.

Roelof van der Merwe, who was promoted to get some quick runs, showed his intent with a reverse-swept four. However, he was caught in the deep without adding much more, giving Wiese his first wicket. Namibia bowled with discipline and managed to slow down the scoring, keeping their opponents to 69/2 at the halfway mark.

From there on, O`Dowd did well to find the gaps and keep the scoreboard ticking. He targeted the shorter boundary on the off-side with a lofted shot to bring up his fifty with a four. He went on to make 70 off 56 balls, run out in the final over while going for the second.

However, it wasn`t easy for other batters to get the big hits, given the large boundaries of the ground. Colin Ackermann, who himself was kept in check by a series of wide yorkers, took 30 balls to hit the first six. Scott Edwards came in at the death and struck three boundaries to make a quick 21* off just 11 and took the Netherlands to 164-4 in 20 overs, which wasn`t enough.