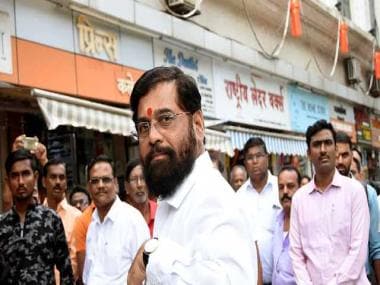 The decision to remove Shinde comes amid the latest political crisis within the Maharasthra’s Maha Vikas Aghadi (MVA) government. The senior leader is believed to be camping at a hotel in Surat with other party MLAs

Shiv Sena on Tuesday removed Maharashtra minister Eknath Shinde as its Legislative party leader. He will be replaced by Sewri MLA Ajay Chaudhary. The decision was taken at the meeting convened by chief minister Uddhav Thackeray today at his Varsha residence.

The decision to remove Shinde comes amid the latest political crisis within the Maharasthra’s Maha Vikas Aghadi (MVA) government. The unprecedented crisis triggered after the senior Shiv Sena leader is said to be camping at a hotel in Surat, Gujarat with 11 party MLAs, the exact gap the BJP needs to topple the incumbent coalition government in the state.

In a tweet, Shinde said: “We are Balasaheb’s staunch Shiv Sainiks. Balasaheb has taught us Hindutva. We have never and will never cheat for power regarding Balasaheb’s thoughts and Dharmaveer Anand Dighe Saheb’s teachings.”

Shinde is said to be missing with 25 other Shiva Sena lawmakers since Monday evening after the Maharashtra Legislative Council election results were declared. The ruling Sena-NCP-Congress’ lost in the polls.

According to News18 sources, Shinde and the other MLAs took a chartered flight at 7 pm on Monday to Surat and are lodged in a five-star hotel there. Also, Shinde and other MLAs were unreachable since last evening.

On Tuesday morning, Shiv Sena leader Sanjay Raut said, “Eknath Shinde is not Mumbai, but communication has been established with him.” There are rumours that Shinde may float his own party.

After the MLC polls result, BJP is 11 short to topple the Maha Vikas Aghadi alliance government in the state. The party secured 134 votes against the majority of 145 in 288 members of the state Assembly.

Maha Vikas Aghadi support base has eroded badly in this election and it has got 151 only votes.

Must Read: Explained: Who is Eknath Shinde? How has Shiv Sena minister plunged MVA govt into crisis?

Total of 285 Maharashtra MLAs had cast their votes while during the counting of two votes each one of BJP and NCP were disqualified due to overwriting the preference numbers.

Reports say that Shinde is upset with the Sena leadership for allegedly being side-lined. The lawmaker who holds the department of urban development wants to become the deputy chief minister, a Congress minister told PTI on condition of anonymity.