In the photo, which is from their wedding festivities, Alia Bhatt and Ranbir Kapoor can be seen sitting beside each other as flowers are being showered on them.

Alia Bhatt announced her pregnancy with Ranbir Kapoor yesterday and wishes have been pouring in since then. The Gangubai Kathiawadi actress married the love of her life in April this year. After she announced that they are expecting their first baby, social media was filled with warm wishes for them which came from both their industry friends and fans. Now, the actress took to her Instagram Story section to share an unseen photo from her wedding to thank her fans.

In the photo, which is from their wedding festivities, Alia and Ranbir can be seen sitting beside each other as flowers are being showered on them. Both of them have their hands folded and are faulting their biggest smiles. Alia is wearing an orange ethnic outfit whereas Ranbir is wearing a cream-coloured sherwani. Sharing it she wrote, “Overwhelmed with all the love! Have tried to read everyone’s messages and good wishes and all I want to say is, it truly feels so special to celebrate such a big moment in our lives with all your love and blessings! Thank you to every single one of you.” 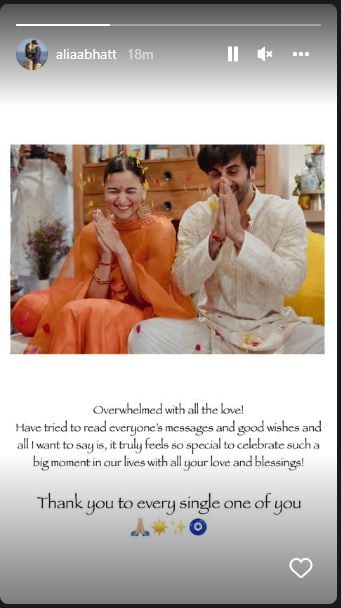 Alia Bhatt announced the pregnancy news by dropping two pictures on her official Instagram account. In the first picture, the actress can be seen lying on a hospital bed, while Ranbir can be seen sitting next to her. Both of them are looking at a screen showing the ultrasound report, which has been obscured with a red heart emoticon. The next picture is of a lion, lioness, and cub. While dropping the picture, she wrote in the caption, “Our baby ….. coming soon,” and ended it with a nazar and a red heart emoticon.

On the work front, the couple will be next seen in Ayan Mukherji’s directorial Brahmastra, which is all set to hit the theatres on September 9.