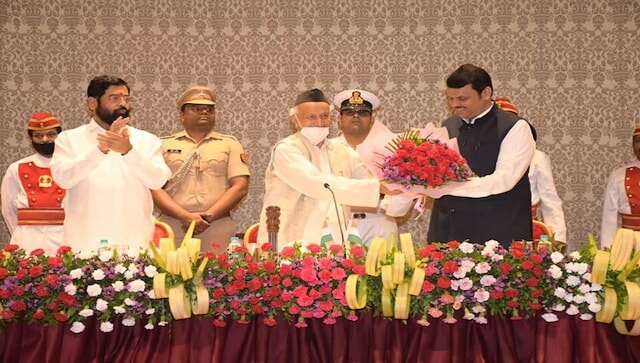 Rebel Shiv Sena leader Eknath Shinde took oath as Maharashtra chief minister while BJP’s Devendra Fadnavis was sworn in as his deputy in Mumbai on Thursday.

The two leaders held the first meeting of the new Cabinet shortly after the oath-taking ceremony. tIn the meeting it was decided that a special session of the Maharashtra legislature will be held from 2 to 3 July.

Both the developments came as a major surprise in the political saga that led to the fall of the Uddhav Thackeray-led Maha Vikas Aghadi government in the state.

It was widely speculated that Fadnavis would return as CM. However, earlier in the day, Fadnavis announced that Shinde who led a rebellion in the Shiv Sena would become the chief minister.

Notably, Fadnavis also said that he “would stay out of power.” However, almost two hours after his statement, BJP top brass announced that Fadnavis would become a part of the government.

On Thursday, Shinde returned to Mumbai from Goa where he was staying after leaving Guwahati. He then met Fadnavis and the duo visited Maharashtra governor Bhagat Singh Koshyari to stake claim for government formation.

“Shiv Sena MLAs were demanding that the alliance with Congress and NCP should be ended but Uddhav Thackeray ignored these MLAs and gave priority to MVA alliance partners, that’s why these MLAs intensified their voices,” Fadnavis said while addressing the media shortly after meeting the governor.

“The decision that we have taken is committed to Balasaheb’s Hindutva & for the development work in the constituencies of our MLAs. We have 50 MLAs with us,” Shinde who was accompanying Fadnavis had said.

The new government formation happened only a day after Uddhav Thackeray resigned as Maharashtra CM. The MVA plunged into a crisis earlier this month after rebel Shiv Sena MLAs loyal to Shinde shifted base to Guwahati.