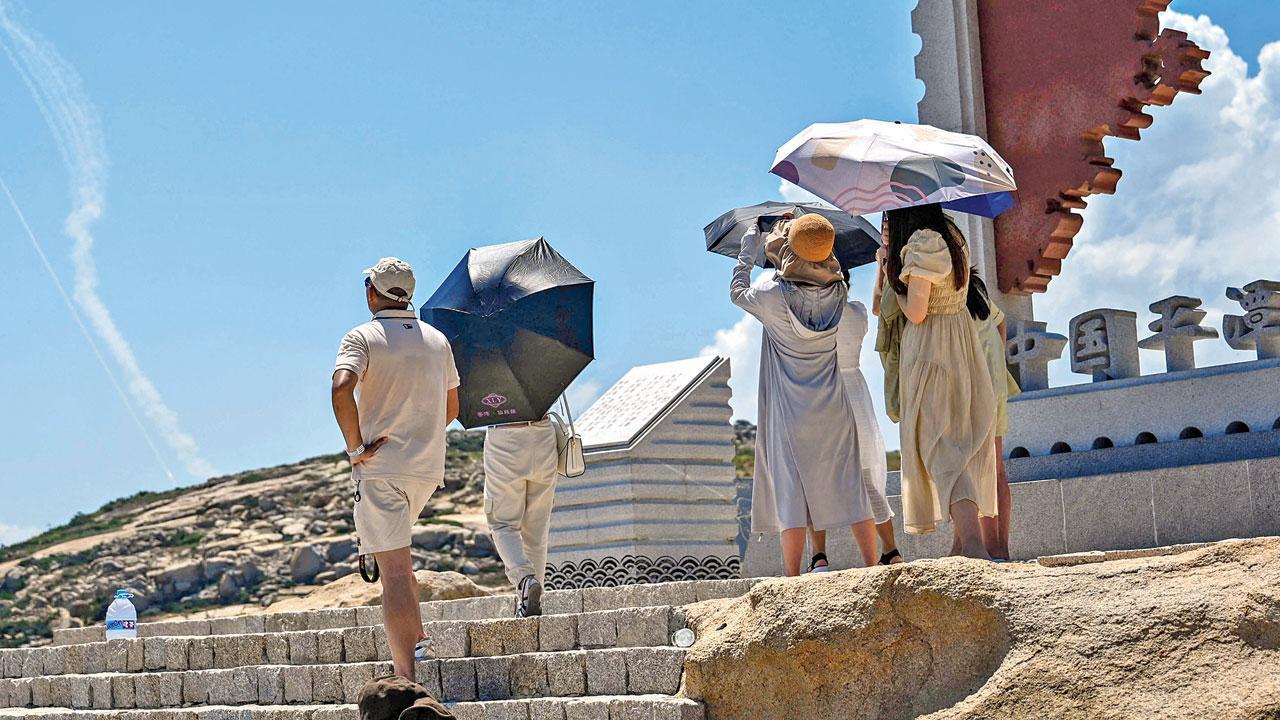 Smoke trails from projectiles launched by the Chinese military are seen in the sky as tourists look on from Pingtan Island, one of mainland China’s closest point from Taiwan, in Fujian province Thursday. Pic/AFP

Taiwan’s defence ministry said the Chinese military launched a total of 11 Dongfeng ballistic missiles into waters near Taiwan’s northern, southern and eastern coasts in several volleys. Taiwan’s foreign ministry said on Thursday China “imitated” North Korea by firing missiles into waters near the island earlier in the day and called for self-restraint amid high tensions with Beijing.

The Chinese military on Thursday said it has conducted precision strikes over the Taiwan Strait and “expected results” were achieved, in apparent retaliation to the US House Speaker Nancy Pelosi’s visit to Taipei disregarding Beijing’s vociferous warnings. China views Taiwan as part of its territory, despite having never controlled it and has long vowed to reunify the island with the Chinese mainland, by force if necessary.

Pelosi’s trip to Taiwan, the first by a sitting US Speaker in 25 years, has angered China. As the 82-year-old top Democrat left Taiwan on Wednesday, there were already signs of the strains her visit to Taipei had placed on Washington’s testy relationship with Beijing – which warned the Biden administration that her trip would have a “severe impact on the political foundation of China-US relations”.

The People’s Liberation Army (PLA) conducted a long-range strike exercise on Thursday afternoon that bombarded a designated area in eastern parts of the Taiwan Straits, official media reported. The live-fire exercise took place at around 1300 hours local time and was carried out by ground force of PLA Eastern Theatre Command, that oversees Taiwan, related areas.

China scolded foreign ministers of the Group of Seven (G7) nations on Thursday for telling Beijing not to use a visit by U.S. House of Representatives Speaker Nancy Pelosi to Taiwan as “pretext for aggressive military activity in the Taiwan Strait”.A G7 foreign ministers joint statement warned that China’s escalatory response risked increasing tensions and destabilising the region and said it was routine for legislators from their countries to travel internationally.