From the United Launch Alliance’s launch of an Atlas V rocket carrying a US Space Force missile to ISRO’s maiden launch of the SSLV, last week witnessed some major satellite launches. But it wasn’t just satellite launches, our weekly space news recap brings you some of the biggest space news that happened over the preceding week.

The diversity in this Hubble image displays how there is a much more complex web of galaxy classifications than just dividing them into either spiral or elliptical categories. (Image credit: ESA/Hubble & NASA, W. Keel)

Trio captured by Hubble illustrates the complexity of galactic nomenclature

The Hubble Space Telescope captured this image of a galactic trio that illustrates how complex galactic classification and naming is. One the upper right of the images is the galaxy LEDA 58109, which is accompanied by two objects: an active galactic nucleus calles SDSS J162558.14+435746.4 and the galaxy SDSS J162557.25+435743.5.

The same galaxy can have different names depending on which galactic catalogue you are referring to. For example, in the case of LEDA 58109, that is its name in the LEDA galaxy database. But the same galactic object is known as MCG+07-34-030 in the MCG catalogue and SDSS J162551.50+435747.5 in the SDSS catalogue. This happens because different catalogues sometimes cover overlapping regions of the sky.

Another important piece of galactic news happened much closer to home. On June 29, our planet set the record for the shortest day ever since scientists began using atomic clocks to measure its rotational speed. On that day, the planet completed one rotation in 1.59 milliseconds less than 24 hours. Even more interesting, the Earth almost broke this record soon after when it completed the rotation in just 1.50 milliseconds less than 24 hours. 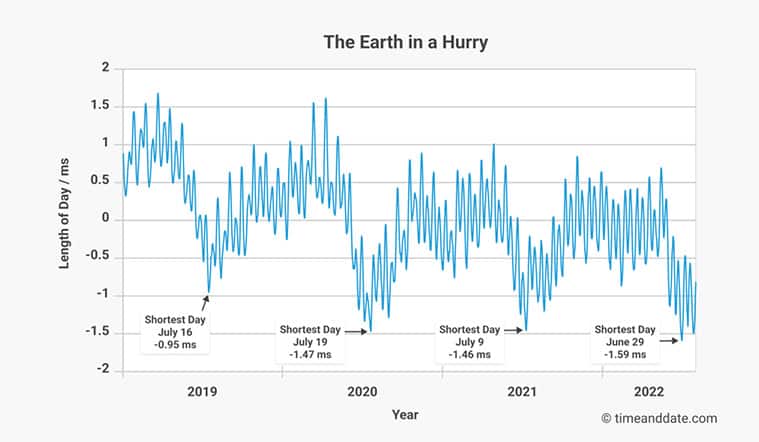 These two anomalous events are part of a larger trend where the Earth’s rotation is seemingly speeding up. This graph created by Time and Date from the Internation Early Rotation and Reference Systems Service (IERS) shows how the average length of day measurement has been on a constant downward trend for a while now. Length of day is the difference between the time the planet takes to complete one rotation on its axis and 86,400 seconds (24 hours). This measurement is often used to measure the speed of Earth’s rotation.

The United Launch Alliance launched an Atlas V rocket with the United States Space Force’s SBIRS (Space Based Infrared System Geosynchronous Earth Orbit) spacecraft. The ULA is a joint venture between Boeing and Lockheed Martin. The Atlas V rocket was launched from the Cape Canaveral Space Force Station at Florida at 6.29 AM EDT (3.59PM IST) on August 4.

SBIRS GEO 6 is the sixth and final part of the Space Force’s SBIRS constellation, which is part of an early missile warning system that will be the successor to the American Defense Support Program (DSP). The first DSP satellite was launched in 1950, so the system is well on its way to obsolescence. SBIRS consists of a constellation of three satellites in geosynchronous orbit and two other classified satellites in a highly elliptical orbit around the poles.

The Centre for Strategic and International Studies reports that the SBIRS constellation has a continuous view of the Earth’s entire surface, which it will image every 10 seconds while searching for infrared activity heat signatures. This means that the system can detect missile launches really fast while also helping identify missile type, burnout veolicty, trajectory, and likely point of impact.

ISRO’s first SSLV (Small Sattelite Launch Vehicle) rocket successfully blasted off on August 7, while carrying an earth observation satellite EOS-02 and student satellite AzaadiSAT. The SSLV vehicle is designed to help the Indian space agency get in on the huge market for small launch vehicles to place satellites into low earth orbits.