Skip to content
Home » Israeli strikes against Islamic Jihad and counterstrikes continue, but Hamas will decide if these escalate into war

Israeli strikes against Islamic Jihad and counterstrikes continue, but Hamas will decide if these escalate into war

The Islamic Jihad organization is aligned with Hamas, but often acts independently. Both are regarded as terrorist organizations by the majority of Western countries 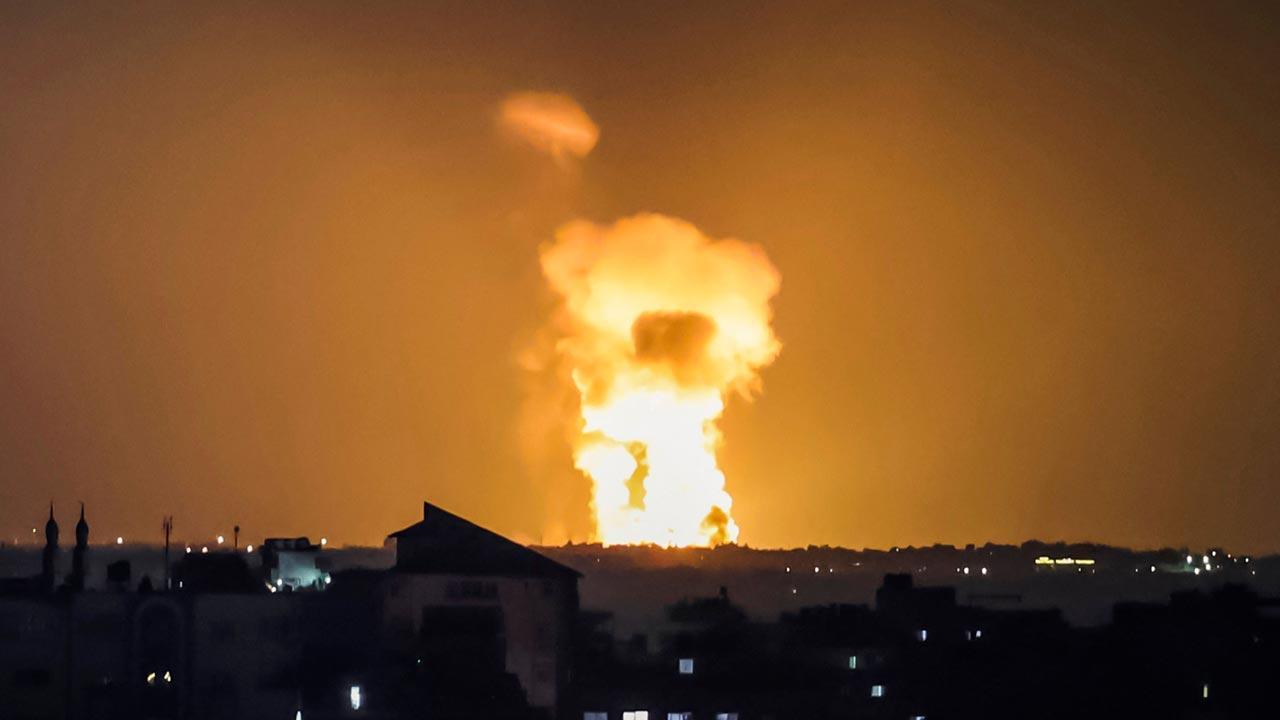 A fireball rises from the site of an Israeli airstrike in Khan Yunis in the southern Gaza Strip. Pic/AFP

As Israel’s “Operation Breaking Dawn” entered its third day on Sunday, with dozens of Palestinian Islamic Jihad (PIJ) targets hit so far in the Gaza Strip by the Israeli Army, to which Jihad responded by firing a barrage of rockets, casualties remain relatively low and the big question is whether Hamas, which is an organization much bigger and stronger than Jihad, will join the fray and the situation will escalate into a war.

Jihad reacted by firing more than 450 rockets at nearby Israeli towns, the vast majority of which were intercepted by Israel’s Iron Dome Defense System. so far, Islamic Jihad’s rockets have not caused major casualties or damage.

Late on Saturday, Islamic Jihad leader in Southern Gaza Khaled Mansour was killed in another Israeli air strike, “neutralizing,” as Oded Basiok, head of Israel’s army operations directorate said, “the senior leadership of the military wing of the Islamic Jihad in Gaza.”

On the Palestinian side the casualties as of Sunday afternoon, according to the Health Ministry in Gaza, were 31 Palestinians, including six children and four women, while another 260 people were injured. The UN has also reported that at least 31 families have been left homeless.

On the Israeli side, there were no deaths from the rockets fired by the Islamic Jihad, but several Israeli citizens were treated for injuries, most of them minor. Thousands of Israelis rushed to bomb shelters or sheltered in safe rooms to avoid the rockets. Scores of fires broke out in areas where the rockets fell.

Furthermore, Israel has arrested 20 members of Islamic Jihad who were active outside of Gaza, in Hebron, Ramallah, and other areas of the West Bank.

Ismail Haniyeh, the Hamas political chief, blamed Israel for the current conflict and stressed that Israel bears full responsibility for the fighting. It is notable, however, that he did not threaten retaliation against Israel, and in telephone calls with Egyptian mediators he asked for their intervention to end hostilities.

The UN special rapporteur on the Palestinian territory Francesca Albanez has said Israel’s attacks on Gaza are not only “illegal but irresponsible”, calling for a diplomatic solution to the crisis.

Undoubtedly, the current strikes in Gaza and the rockets fired by Islamic Jihad against Israeli towns, represent the first security crisis for Israeli caretaker Prime Minister Yair Lapid who took office just five weeks ago. As Lapid has no military experience, he is attacked by supporters of former Prime Minister Benjamin Netanyahu and Israeli right-wingers as too soft and feeble.

If the conflict does not escalate, the damage remains limited and the fighting ends, Lapid’s popularity will increase and will improve his chances in the forthcoming general elections in Israel next November. On the contrary, if the fighting continues for weeks, he will be branded as an inexperienced civilian who should leave things to tested and experienced leaders, such as Netanyahu.

The Islamic Jihad organization is aligned with Hamas, but often acts independently. Both are regarded as terrorist organizations by the majority of Western countries.

In November 2019, following the assassination of Palestinian Islamic Jihad leader Baha Abu al-Ata, Jihad fired more than 400 rockets against Israeli towns near Gaza, the majority of which were intercepted. As Israel carried out several strikes against Gaza, 34 Palestinians were killed. Hamas did not join the conflict at that time.

So far Hamas, the larger militant group that rules Gaza, apart from a verbal condemnation of the Israeli strikes, refrained from taking part in the hostilities. The organization apparently wants to avoid a repetition of its 11-day conflict with Israel in May 2021 that resulted in the loss of 250 Palestinian and 13 Israeli lives, destroyed a large part of the infrastructure in Gaza, and forced countless Israelis to rush to bomb shelters.

Hamas, which rules the isolated Gaza, has not been able to replace the infrastructure destroyed last year and as donations from oil-rich Arab countries have almost entirely dried out, most of the enclave’s inhabitants live in abject poverty and at least half of its population is unemployed.

Moreover, the electricity authority of Gaza has announced that the only power plant operating in the enclave would shut down at noon on Sunday due to a diesel shortage resulting from the closure of the crossings to the Strip over the past week.

So, unless the death toll in the current conflict between PIJ and Israel rises to unacceptable levels, Hamas will most probably refrain from striking Israel.

Haaretz journalist Zvi Bar El points out that so far, “Israel has not damaged civilian infrastructure or Hamas bases and weapons manufacturing facilities. It has not threatened to kill its leaders, and it continues to convey messages through Egypt that the group is not on its list of targets.”

One ray of hope appeared on Sunday afternoon as Al Jazeera reported that a ceasefire in Gaza is set to take place on Sunday at 1700 GMT according to Islamic Jihad sources and Egypt’s mediation team.

Breaking NewsisraelLatest breaking newsLatest NewsLatest World NewsNews headlinesPalestinian Islamic JihadToday news headlinesWorld Breaking NewsWorld Latest NewsWorld news
Prev post Can Nitish Kumar hold on to power in Bihar if the JD(U)’s alliance with the BJP comes to an end?
Next post Apple slows pace of dealmaking even as its tech peers plow ahead